According to a recent survey from Gartner Inc.the public sector has the longest buying cycle for technology purchases, at 22 months on average.

Gartner surveyed 1,120 executives, including 79 from the public sector, residing in North America, Western Europe or Asia/Pacific regions. Seven per cent of respondents were from Canada, while 36 per cent were from the US. The respondents were required to be at manager level or higher, and be conscious of or involved in large scale buying efforts of software, services, hardware, managed services or integrated solutions.

More than 48 per cent of public sector respondents reported moderate to significant delays in the tech buying cycle, with the majority of respondents reporting that each of the three stages of the buying process (initial exploration, engagement and selection of providers, and the establishing of a contract) takes between three and 12 months, resulting in the 22 month average cycle. 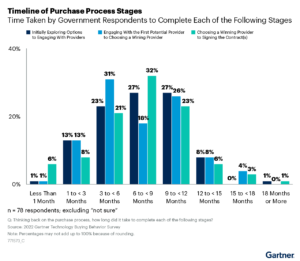 According to the report, public sector buying teams are complex. Government c-level executives (41 per cent) are less likely to take part in the buying cycle than their private counterparts (55 per cent) to avoid the impression of political influence on purchases and subsequent media questioning if the buying process is challenged.

The report argues that public sector buying teams also tend to involve lower-level operational staff who take on the responsibility of experts. Card added that many of those in the public sector fail to consult the literature on running complex IT transformations or IT outsourcing transactions. “I see a general disinterest in any kind of transactional rigor or professional engagement in IT procurements that clearly require adult supervision,” he said.

Furthermore, 74 per cent of public sector respondents reported delays around developing a business case, while 76 per cent attributed the delays to scope changes and budgeting.

In contrast, 68 per cent of public sector respondents indicated delay caused by lack of specific product information and implementation requirements details from providers.

Gartner recommends that technology providers maintain an accessible list of public sector reference clients and a diverse library of product collateral focusing on value assessment that can be leveraged across all stages of the buying cycle.

Card affirmed that “Gartner does an exceptional job of reminding government IT procurement executives that, not only are the excessively high rates of IT procurement failure intolerable, but it seems that no one engaged in those transactions, over the last 20 years of consistently high IT project failure rates, has learned any of easy and simple lessons about to avoid most of those failures.”