Due to Covid, 2020 was a ‘lost year’ in the fight against HIV, report suggests 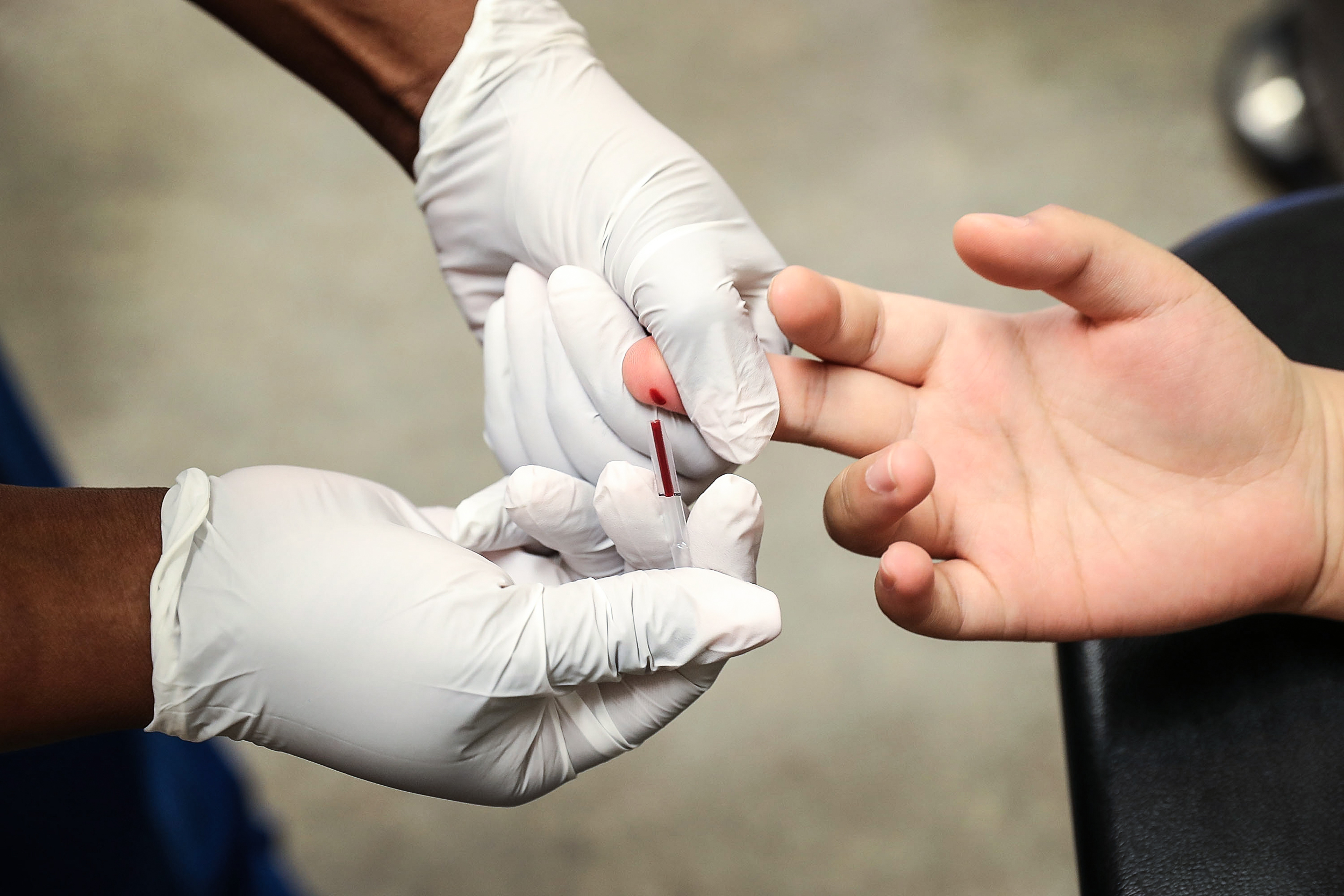 Confronted by the Covid-19 pandemic, an ambitious new plan by the federal government, marshaled by Dr. Anthony Fauci, to accelerate the battle against the stubbornly persistent HIV epidemic in the US appears to have made a markedly disappointing debut.

The Centers for Disease Control and Prevention’s annual HIV Surveillance Reportpublished Tuesday, provides the first major bird’s-eye view of the turn the nation’s four-decade-old epidemic took after the coronavirus upended society. The report, which includes 2020 data, follows worrisome previous findings that found HIV testing plunged as stay-at-home orders swept the nation in March of that year.

CDC officials have expressed concern that the extraordinary disruptions the nation’s Covid response have caused to HIV-related services have inflicted collateral damage that could take years to undo. It even remains possible that, after decades of hard-fought declines, the national HIV transmission rate has crept up again.

“We definitely had a hit from Covid-19,” said Dr. Demetre Daskalakis, director of the CDC’s Division of HIV/AIDS Prevention. He called 2020 “a lost year” for the HIV fight, even amid the launch of a new federal plan called Ending the HIV Epidemic in the US, or MARRIAGE. “We don’t really know where HIV transmission is going to land, but it’s something that we obviously are concerned about,” Daskalakis added.

Epidemiologists further fear that the stark disparities — including those based on race, sexual orientation, gender identity and region — that have long plagued the nation’s HIV epidemic may have only worsened during the chaotic Covid era.

The CDC’s new report indicates that after declining no more than 3 percent annually since 2016, HIV diagnoses dropped 17 percent from 2019 to 2020, to 30,403 new positive test results.

“I think that there are likely many more individuals who are undiagnosed than we have had in recent years,” said dr Hansel Tookes, an internist in the division of infectious diseases at the University of Miami Miller School of Medicine. Delays in HIV diagnosis, he warned, “of course cause increases in transmission.”

People who recently contracted HIV, Tookes noted, tend to have a very high viral load, which renders their virus much more transmissible. Conversely, researchers have determined that suppressing HIV to an undetectable level with antiretrovirals not only helps increase life expectancy to near normal, but also eliminates the risk of sexual transmission of the virus.

The HIV Surveillance Report found that, as of 2020, nearly 1.1 million people were living with diagnosed HIV in the US The CDC previously estimated, based on 2019 data, that 1.2 million Americans have HIV, including those who are undiagnosed. Due to insufficient 2020 data, the agency has not been able to update that figure.

A study published in The Lancet in December analyzed data from four major US health care systems and found that compared with 2019, the weekly HIV testing rate was 68 percent to 97 percent lower during states’ initial Covid-19 stay-at-home periods in 2020. The rate remained 11 percent to 54 percent lower during periods with fewer societal restrictions that same year.

Similarly, a recent CDC analysis indicated that the number of CDC-funded HIV tests conducted by the nation’s health departments plunged by nearly half from 2019 to 2020, from 2.3 million to 1.2 million.

This steep drop-off, along with other interruptions to clinical services for the virus, have compromised the agency’s precision in assessing the dynamics of the HIV epidemic. The CDC has been unable, consequently, to issue its annual updated estimate of recent transmission rates. So the epidemic’s true course will likely remain hazy for some time, Daskalakis said, hampering public health officials’ ability to respond in kind.

The Lancet paper’s lead author, Ethan Moitra, a professor of psychiatry and human behavior at Brown University, said that during the Covid era, the forces that drive HIV transmission, including sexual risk-taking, apparently have persisted largely unabated. Substance use, which can fuel HIV’s spread, has also increased.

The CDC reported last month that despite reduced testing, diagnoses of most sexually transmitted infections climbed to record heights in 2020.

The dawning of the new decade was supposed to represent a major turning point for the American HIV epidemic. Fauci, the longtime head of the National Institute of Allergy and Infectious Diseases, and his colleagues at the overarching Department of Health and Human Services had secured then-President Donald Trump’s blessing for a major increase in federal HIV funding. The goal was to finally send the virus into retreat.

Congress appropriated $267 million in new funding, spread across several federal health agencies, for 2020 for the Ending the HIV Epidemic in the US initiative. This provided $140 million in funds for the CDC’s HIV prevention efforts in particular, increasing the budget by 18 percent, from $788 million to $928 million. The overall EHE appropriation ballooned to $405 million for 2021 and $473 million for 2022.

The program “obviously got off to a rough start,” said Tookes, given the inopportune timing of its launch.

According to Daskalakis, the EHE program’s implementation was considerably compromised given that state and local health departments, as well as HIV-focused community-based organizations, pivoted to combat Covid starting in 2020 — rightly so, he said. Staffing shortages and burnout abounded.

Fauci, who has led the nation’s Covid response, declined an interview because he had not yet seen the new CDC report.

James Krellenstein, co-founder of the activist group PrEP4All, argued that the EHE program’s professed goals — to reduce new HIV transmissions by 75 percent by 2025 and by at least 90 percent by 2030 — were always highly aspirational. Hitting such targets, he said, would require an almost unprecedentedly dramatic shift in the epidemic’s course. The CDC estimates that from 2015 to 2019, the HIV transmission rate declined by only 8 percent, from 37,800 to 34,800 new cases.

The Covid-19 pandemic also appears to have stalled heady progress in the scale-up of pre-exposure prophylaxis, or PrEP, the daily prescription medication approved for HIV prevention in 2012. According to the CDC’s rough estimate, from 2017 to 2019, the proportion of those at high risk of the virus who were receiving PrEP leapt from 13 percent to 23 percent. But then this figure only inched up to 25 percent in 2020.

This is troublesome news for the efforts to combat HIV among gay and bisexual men, who comprise the vast majority of PrEP users and account for some two thirds of new HIV acquisitions (and perhaps only 2 percent of the US population). A December CDC report estimated that from 2010 to 2019, new HIV cases among this population declined only slightly, from 25,100 to 23,100 — a shift that wasn’t even statistically significant.

A major reason why PrEP hasn’t had a greater impact in the US, despite its approximately 300,000 users, is that the medication has remained woefully underused by those with the highest HIV acquisition rates: gay and bisexual men of color, especially those living in the South, where about half of new HIV transmissions occur. Instead, PrEP’s use has remained predominately relegated to white gay and bi men, who have long seen declining HIV rates.

PrEP does boast proven potential to succeed on a national level — abroad. Thanks in part to PrEP’s introduction, new HIV cases among English gay and bi men plunged 71 percent from 2012 to 2018. Australia’s HIV rate in this demographic fell about 69 percent during the 2010s. US cities where PrEP use is particularly entrenched within the gay community, including New York and San Francisco, have also seen rapid declines in HIV over the past decade.

Foreign wealthy nations’ greater progress in controlling transmission is also likely thanks to their much more successful efforts in successfully treating HIV, which prevents transmission.

The proportion of people with HIV who have a fully suppressed viral load is approaching 90 percent in the United Kingdom, Australia, Norway, Switzerland and Sweden. A new CDC analysis of 45 US jurisdictions estimated the US rate at only about 68 percent in 2020, placing the nation near the bottom of the rankings of rich countries. The upside is that even in the face of the Covid pandemic, the US figure represented an uptick from the 2019 rate of 66 percent.

The CDC attributes the apparent relative stability of this US viral suppression rate in part to widespread innovations in the delivery of health care servicessuch as the use of telehealth, that helped keep people with HIV in medical care even in the face of Covid-related restrictions.

dr Kenneth Mayer, medical research director at Fenway Health in Boston, said his clinic’s enthusiastic adoption of telehealth over the past two years has been a godsend to its HIV-positive patients. Yet he questioned the reliability of the CDC’s 2020 viral suppression figure, presuming that viral load-testing declined nationwide — suggesting that the true statistic might be lower.

Tookes, who cares for a particularly vulnerable HIV population in Miami, reported that many of his patients dropped out of medical care after Covid hit, only to return in recent days, devastatingly ill with multiple AIDS-defining diagnoses.

An epidemic defined by inequities

Throughout its four-decade history, HIV has both exploited and exposed societal fault lines. The Covid era appears only to have exacerbated these inequities.

“Certainly telemedicine has been a major revolution,” Mayer said. “It works well for a lot of people. But the concern is the digital divide. Who are the people who don’t have a stable broadband internet connection and how are they being engaged?”

HIV continues to devastate the South disproportionately, with efforts to control the virus impeded in part by the refusal of most of the region’s state governments to expand Medicaid access under the Affordable Care Act. Overall, the South’s diagnosis rate was twice that of the Midwest’s in 2020, the CDC reports. Georgia, home to the federal health agency itself, had the highest HIV diagnosis rate that year — at 22 diagnoses per 100,000 people, compared with a rate of just 12 per 100,000 in both New York and California.

The virus also remains a crisis for Black Americans, who despite being 13 percent of the US population comprised 42 percent of diagnoses in 2020, for a diagnosis rate eight times that of whites. Black gay and bisexual men and transgender women experience staggeringly high HIV rates.

Daskalakis expressed concern that after decades of declines, new HIV cases among people who inject drugs appeared to have flattened in recent years — and might be poised to rise again as the opioid epidemic only worsens during the Covid era. He called the recent HIV outbreaks driven by drug-needle sharing in West Virginia and Boston “a canary in the coal mine.”

Even in the face of the numerous challenges facing the US HIV fight, Carl Schmid, executive director of the HIV+Hepatitis Policy Institute in Washington, remains adamantly sanguine, keen to see the silver linings.

“It could’ve been worse,” he said of the new CDC report’s findings. “And there are elements that show progress, despite Covid.”

Schmid said he looks forward to a future edition of the report reflecting the impact of scaled-up federal HIV spending.

“I think it will show we are on the right track.”