Canadian Laurent Duvernay-Tardif is putting his NFL career on hold once again.

Duvernay-Tardif told The Canadian Press on Wednesday he has received four contract offers from NFL clubs — he wouldn’t divulge the teams — but is putting football on the back burner after being accepted into a residency program at a Montreal-area hospital, starting next month.

The veteran offensive lineman has been an unrestricted NFL free agent since March. He’s not retiring, rather he’s taking care of medical requirements needed to become a physician.

He plans to reassess both his football interest as well as that of prospective NFL clubs in September.

“I’m going to prioritize medicine . . . and we’ll see in September if there’s a fit,” Duvernay-Tardif said in a telephone interview. “After eight years in the NFL, and I don’t want to sound pretentious by saying this, but I think I’ve earned the right to do what’s best for me and not just for football and kind of bet on myself a little bit .

“I’m really comfortable with the risk and I’m pretty confident there’s going to be an offer on the table in September if I want it. And if I want it I’ll take it. If medicine is going well and I feel like I’ve got to be out there in front of 80,000 people to play the sport I love, well, I’ll go but I think I want it to be more on my terms.”

Duvernay-Tardif said he has been transparent and up front with interested clubs regarding his medical commitments.

“I thought it was best I be straightforward and say the best move for me was to start my residency in July but I was open to maybe making a move in September,” he said. “Interestingly, some teams were pretty open to that idea.

“I have another passion that I’ve worked hard the past 14 years to maintain with the requirement of football… and I can’t jeopardize that after all I’ve done.”

Duvernay-Tardif said if a return to the NFL is in the cards, he’s confident he’ll be able to take a five-month leave to resume his pro career.

“I will stay in shape because I don’t want my physical condition to be an obstacle to me going back.” 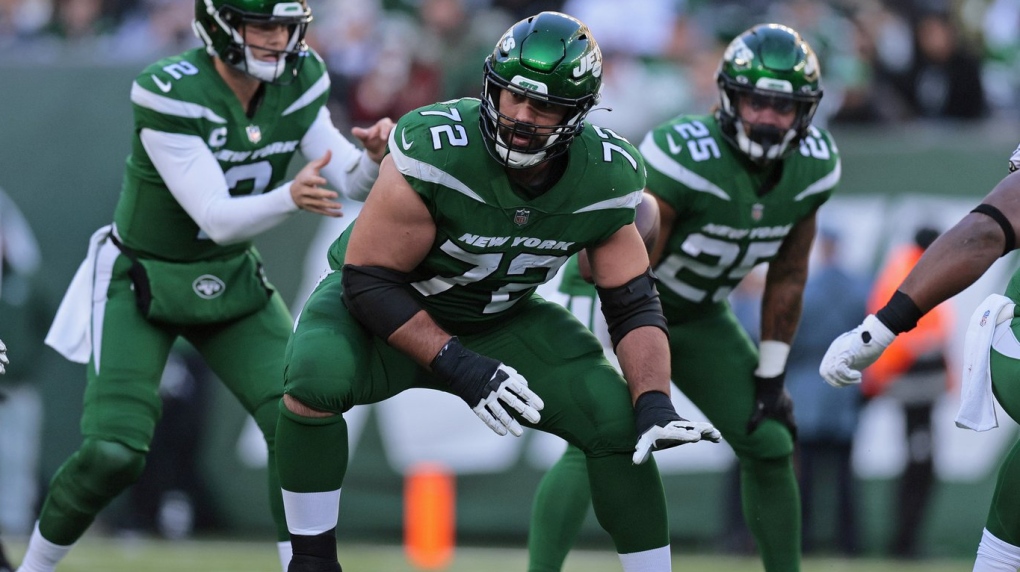 The move isn’t surprising. After finishing last season with the New York Jets, the six-foot-five, 321-pound Duvernay-Tardif told Canadian reporters he had medical-school considerations to address this winter in addition to his NFL future.

He received his doctorate in medicine and a master’s degree in surgery from McGill University in 2018, and Duvernay-Tardif said medical graduates usually had four years to start their residency.

“McGill always told me the rules were the rules,” he said. “You’ve got eight years to complete your doctorate and four years after you graduate to apply for residency.

It’s not the first time Duvernay-Tardif has decided to leave pro football. Shortly after helping the Kansas City Chiefs secure a Super Bowl victory, the Mont-Saint-Hilaire, Que., native became the first NFL player to opt out of the ’20 season to battle the COVID-19 pandemic working at a Montreal long- term care facility.

Duvernay-Tardif was widely recognized for his decision. He was a co-recipient of the Lou Marsh Trophy as Canada’s top athlete and named ESPN’s Muhammad Ali Sports Humanitarian of the Year, as well as one of Sports Illustrated’s 2020 Sportspersons of the year.

He also served on the NFL Players’ Association’s COVID-19 task force and remains on the union’s health-and-safety committee.

Duvernay-Tardif returned to Kansas City last season expecting to battle for his starting spot. But he suffered a broken hand during training camp that sidelined him for a month.

When Duvernay-Tardif rejoined the team, he was inactive as rookie Trey Smith, a ’21 sixth-round draft pick, had become the Chiefs’ starting right guard. In November, Duvernay-Tardif waived his no-trade clause, allowing Kansas City to deal him to the Jets.

The 31-year-old started seven of his eight games at right guard for the Jets (4-13), who finished last in the AFC East.

Duvernay-Tardif said while he still has a strong passion for football, he could walk away from the game content with his career accomplishments.

“Absolutely,” he said. “When I opted out, I was comfortable with the idea of ​​not going back on a football field after winning a Super Bowl and I think I have that same mindset.

“For me, it would be a matter of the fit, the culture of the team I’m going to, the chance of winning the Super Bowl. And more importantly, does it fit with medicine and do I feel like I can put medicine on hold for five months to do that?”

Duvernay-Tardif was already in medical school when Kansas City took him in the sixth round of the ’14 NFL draft out of McGill. He initially played football during the NFL season, then spent his off-season continuing his medical studies.

Recently, the CEGEP school Duvernay-Tardif attended named its locker room after him. In Quebec, students attend high school through to Grade 11, then attend a CEGEP institution for two years, participating in programs that prepare them for either university or the job market.

“That was pretty sweet,” Duvernay-Tardif said. “I wasn’t sure how I was going to react but, man, I got emotional.

“At McGill, I was studying so much that I wasn’t really part of the camaraderie (of dressing room) because I was always in the library missing practices. During my time at the college I went, I really felt like I was part of something and it was amazing. A lot of good memories there.”