Evander Kane scored a natural hat trick during an electric six-minute span and captain Connor McDavid provided more magic with three assists in another dominant performance as the Edmonton Oilers downed the Calgary Flames 4-1 on Sunday to take a 2-1 lead in their second round playoff series.

Mike Smith, who was briefly replaced by Mikko Koskinen in the third period after getting run over by Milan Lucic, made 31 saves in the win.

Zach Hyman had the other goal for Edmonton, while Leon Draisaitl set an NHL record with four assists in a playoff period. Koskinen wasn’t forced to make a stop in just over four minutes of action.

Oliver Kylington replied for Calgary. Jacob Markstrom allowed four goals on 34 shots before getting pulled for the Flames, who have been outscored 8-1 since taking a 3-1 lead in the second period of Game 2. Dan Vladar made seven saves in relief.

The Oilers will look to take a 3-1 stranglehold on the best-of-seven Battle of Alberta – the first post-season meeting between the provincial rivals in 31 years – Tuesday night at Rogers Place.

The first playoff meeting in Edmonton to feature the Oilers and Flames since April 14, 1991, when Theo Fleury scored in overtime of Game 6 to spark a wild and memorable celebration, the Oilers exploded for four goals in just over 12 minutes in the second period , including Kane’s second hat trick of the month.

Hyman opened the scoring 52 seconds after the restart following a 21-shot first off a setup from Draisaitl and McDavid for his sixth goal of the post-season to ignite the crowd inside and outside a packed Rogers Place.

Kane, who signed with the Oilers in January after having his contract terminated by the San Jose Sharks following a string of off-ice incidents, scored his first of the night at 6:58 off a feed from Draisaitl after the Flames turned the puck over at the offensive blue line.

The winger then pushed the lead to 3-0 on an outrageous McDavid rush after stepping past Calgary defenseman Noah Hanifin like he wasn’t even there just 53 seconds later.

Smith made a great save on a Johnny Gaudreau breakaway later in the period before also denying Matthew Tkachuk.

Kane completed his hat trick – the seventh-fastest in NHL post-season history – with his 10th goal of the 2021-22 playoffs at 12:58 on a 2-on-1 with McDavid before fans littered the ice with headgear. 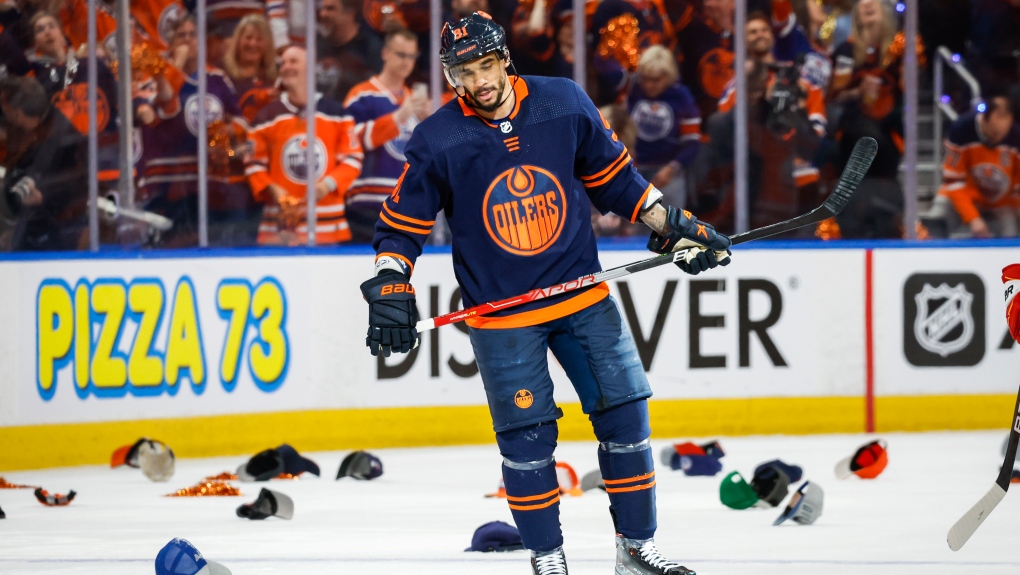 Edmonton Oilers winger Evander Kane skates amongst hats thrown onto the ice after his hat-trick during second period NHL second round playoff hockey action against the Calgary Flames in Edmonton, Sunday, May 22, 2022 (The Canadian Press/Jeff McIntosh).

Markstrom, who allowed 11 combined goals in Games 1 and 2 after posting a .941 save percentage in the opening round against the Dallas Stars, got the hook in favor of Vladar to start the third with the Flames turning their attention to Game 4.

Calgary, which finished seven points clear of Edmonton in the regular-season standings to top the Pacific Division and was minus injured defenseman Chris Tanev (undisclosed) for a fourth straight contest, got a power play early in the final period looking for a spark, but Smith was sharp at every turn.

Lucic ran over Smith behind the Oilers’ net midway through the third to kick off a melee involving all 10 skaters. The Edmonton netminder was subsequently removed in favor of Koskinen, but returned to a hero’s welcome after re-emerging from the locker room.

Kylington got a consolation goal for the visitors – his first of the playoffs – with under five minutes to go in regulation.

The Oilers fell behind early in both games at Calgary’s Scotiabank Saddledome, but after losing a wild opener 9-6, rebounded with a 5-3 comeback victory two nights later to even things up 1-1.

Edmonton had a much better start Sunday, with Brett Kulak’s point shot that leaked through Markstrom and hit post before being cleared away by the Flames goaltender and defenseman Nikita Zadorov had the best chance of the opening period.

The Flames had hoped to keep the action at 5-on-5 as much as possible after McDavid, Draisaitl and the Oilers took advantage of power play, short-handed and four-on-four situations in Game 3, but took two penalties to Edmonton’s one in the first.

McDavid, who seemed to have the puck all period, went on one of his jaw-dropping rushes on his team’s second man advantage, but Markstrom was there to deny the Oilers captain in what was a sign of things to come.

This report by The Canadian Press was first published May 22, 2022.