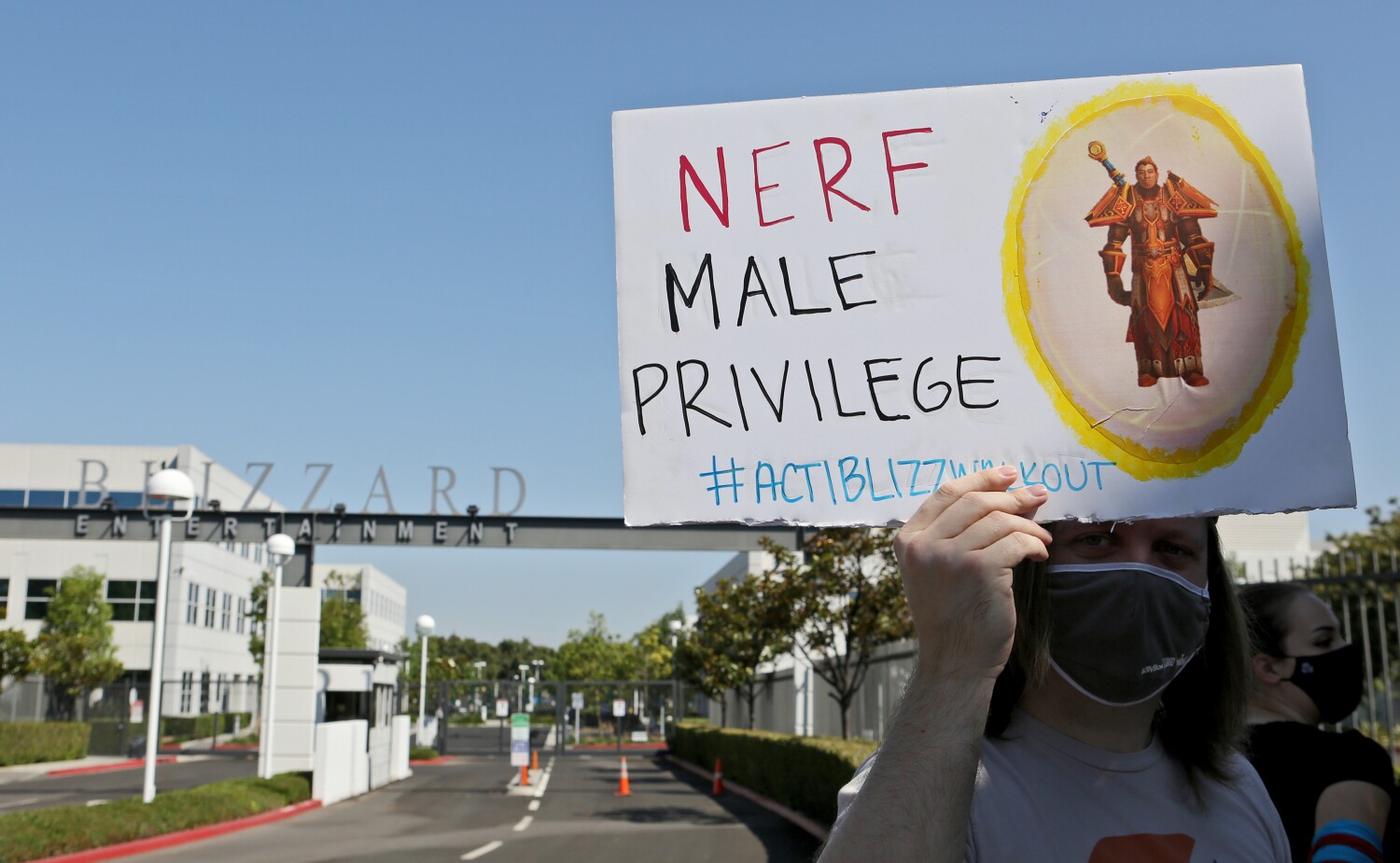 Activision Blizzard agreed to set up an $18-million fund for employees who experienced sexual harassment or discrimination, pregnancy discrimination or retaliation as part of a settlement with a federal employment agency on Tuesday.

The consent decree, which a federal judge said she intended to sign following a hearing Tuesday, comes in response to a lawsuit filed against the Santa Monica video game company in September by the Equal Employment Opportunity Commission, which alleged that Activision employees were subject to ” severe” and “pervasive” sexual harassment in the workplace.

Anyone who worked at the company after September 2016 and believes that they were subject to harassment, discrimination or retaliation will be eligible to apply for a share of the cash payout. The company officially denied all wrongdoing as part of the settlement, which also included requirements for regular audits overseen by the federal agency over the next three years, changes to workplace policies and anti-harassment training.

“The court’s approval of this settlement is an important step in ensuring that our employees have mechanisms for recourse if they experienced any form of harassment or retaliation,” Activision Blizzard Chief Executive Bobby Kotick said in a statement.

But a number of suits against Activision Blizzard on sexual harassment and discrimination grounds remain active in the courts, including one filed last week by attorney Lisa Bloom on behalf of a current employee. Meanwhile, the California agency that led the way in prosecuting the company last year objected to Tuesday’s federal settlement when it was first proposed in the fall, arguing that it would undermine the state suit.

In a bombshell filing in the summer, the California Department of Fair Employment and Housing alleged that Activision, and its Blizzard division in particular, fostered a “pervasive frat boy workplace culture” where managers led employees on drunken “cube crawls” to harass and grope female employees, where pay discrimination was rampant, and where those who spoke up against the behavior were punished.

The filing kicked off months of employee unrest and new legal actions, including an employee walkout, petitions calling for the ouster of Kotick, and complaints and investigations by the EEOC, the Securities and Exchange Commission and the National Labor Relations Board.

To receive money from the $18-million fund established by Tuesday’s consent decree, however, recipients must sign a document that waives their rights to recover any monetary damages or other relief that may come from the California lawsuit for sexual harassment, pregnancy discrimination or related retaliation .

Judge Dale S. Fischer rejected the Department of Fair Employment and Housing’s attempt to intervene in the consent decree in the fall, but the agency is appealing that decision. In the Tuesday hearing, on Zoom, the agency’s lawyer, Jahan Sagafi, again raised objections, saying that “the EEOC should never have filed this case” while the state case was underway. Fischer again rejected the California Agency’s argument.

The Department of Fair Employment and Housing was not alone in raising objections to the settlement. Communications Workers of America, a labor union that has been increasingly active in organizing and advocating for workers in the tech and video game industries, also argued against the consent decree in the fall. In a statement Tuesday, Sara Steffens, secretary-treasurer of the union, said that “Judge Fischer’s approval of the EEOC’s consent decree with Activision Blizzard is disappointing and premature,” and that the federal settlement does not hold Activision Blizzard management “truly accountable for the harm they have done.”

(CWA is also the parent union of the NewsGuild, which represents workers at the Los Angeles Times and most major newspapers in the country.)

A Department of Fair Employment and Housing spokesperson said in a statement that the agency “will continue to vigorously prosecute its action against Activision in California state court,” adding that the state court has set a trial date for February.

As Activision seemingly closed one front in its legal defense, another was heating up. As the Zoom hearing in the federal court began, Bloom hosted a news conference at which three of the women she is representing discussed their experiences in what they described as a corporate culture of sexual harassment and assault. The women withheld their full names for privacy reasons.

“For years, the women who work at the company have been fighting the monsters inside the company who treated them like dirt,” said Bloom, who is representing a total of eight current and former employees.

One current employee, Christine — identified as “Jane Doe” in Bloom’s new lawsuit — said she was subjected to frequent sexual advances.

“I’ve had men in … leadership roles put their hands on my lap, come up behind me and tightly hug me from behind, give me their personal phone numbers with comments about coming home to take care of me, touch my breasts, make comments about my body and try to kiss me,” she said.

Shannon, another client of Bloom’s who spoke via Zoom at the event, said she “suffered sexual harassment, sexual battery and sexual assaults by [her] managers and supervisors,” including on business trips. “When I tried to rebuff their sexual advances, I was reprimanded, ridiculed and threatened with retaliation.”

Ariel, the third speaker, said that she’s dealt with sexual and emotional abuse at Activision, and that one abuser told her that going to human resources would be “pointless.” She encouraged additional victims to come forward.

Bloom also read a statement from a fourth woman who has chosen to remain anonymous, in which the woman described a corporate culture of persistent drinking and crude jokes that was cult-like and akin to hazing.

“What I experienced during my tenure at Blizzard was nothing short of horrendous,” the anonymous complainant wrote. “Some of the most disturbing experiences I had in my entire career in the gaming industry happened at” the company, she added, citing casual jokes about rape and a mandatory book club at which company leadership handed out tequila shots.

“I thought that by speaking up, I would help others,” the statement concluded. “But [in] the end, it only hurts my career.”

Activision Blizzard’s major franchises include “Call of Duty,” “Warcraft,” “Overwatch,” “Hearthstone” and “Candy Crush.” The company reported revenues of $8.8 billion in 2021. Microsoft announced its plan to buy the company for $68.7 billion in January.

Kotick will receive a payout of more than $390 million if the Microsoft deal is approved by regulators. A Wall Street Journal investigation last year showed that Kotick knew about sexual harassment allegations for years.