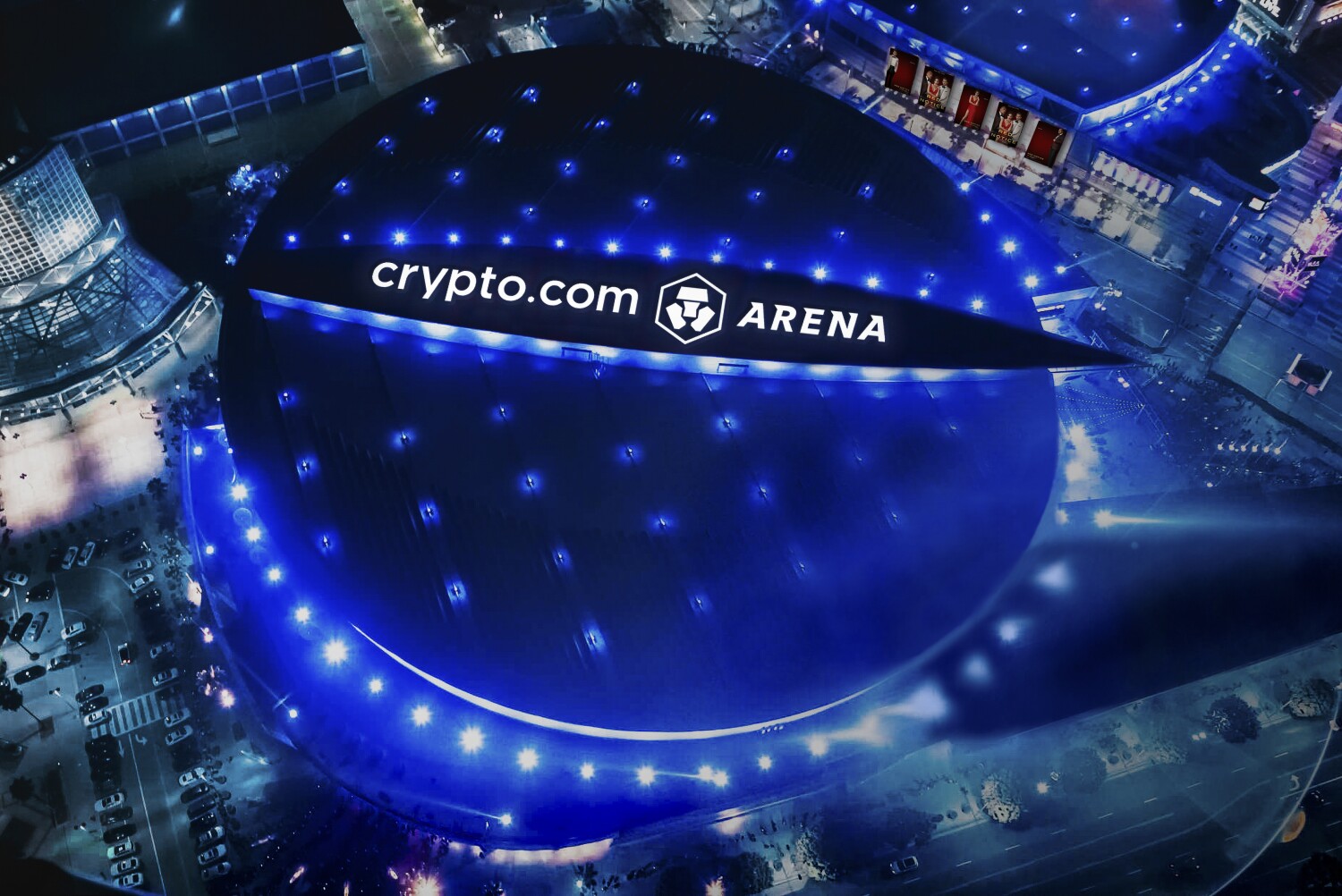 Staples Center is getting a new name for Christmas: Crypto.com Arena.

The downtown Los Angeles venue — home of the Lakers, Clippers, Kings and Sparks — will wear the new name for 20 years under a deal between the Singapore cryptocurrency exchange and AEG, the owner and operator of the arena, both parties announced Tuesday. Crypto.com paid more than $700 million for the naming rights, according to sources familiar with the terms, making it one of the biggest naming deals in sports history.

3:22 pm Nov 17, 2021An earlier version of this article incorrectly stated that AEG owns the Oakland Coliseum. It operates but does not own the venue.

The arena’s new logo will debut Dec. 25, when the Lakers host the Brooklyn Nets, and all of Staples Center signage will be replaced with the new name by June 2022.

Crypto.com’s chief executive, Kris Marszalek, hopes that the new name will come to be seen as a sign of the times.

“In the next few years, people will look back at this moment as the moment when crypto crossed the chasm into the mainstream,” Marszalek said when reached at his home in Hong Kong.

“This is just such a brilliant move from the guys at AEG, because the next decade belongs to crypto,” he said. “And this positions LA and this particular venue right at the center of it.”

AEG owns a number of sports teams, including the Kings and Galaxy, and venues, including LA Live and London’s O2 Arena. It operates the Oakland Coliseum is one of the nation’s largest event promoters, producing Coachella, among others.

“It’s a bit of a match made in heaven, when we think about the type of brands that we like to partner with,” Beckerman said. “Crypto.com is looking for the most unique branding platform to make a statement and drive adoption, and we’re looking for an innovative, forward-thinking company to help us chart a course for the future of sports and entertainment events.”

AEG and Crypto.com are still working out exactly how far the partnership will go beyond the name, but integrating cryptocurrency payments into the arena and online purchases may be on the horizon.

Visitors will see one clear change at the entrance to the arena from LA Live, adjacent to the statue of Magic Johnson, where 3,300 square feet will become a dedicated Crypto.com “activation space” featuring crypto-centric interactive experiences for sports or music fans . Crypto.com has also signed with the Lakers and Kings as their official crypto partner.

The storied venue got its original name in December 1997, when then-booming Staples Inc. paid $100 million for the rights for 10 years. Beckerman, who was chief financial officer of AEG when the arena complex was first being developed, said that the value of the name was less of a sure thing back then.

But after Staples Center became the home of the Lakers squads that Kobe Bryant and Shaquille O’Neal led to three consecutive championships in the early 2000s, after the downtown district around the center developed into a revived tourist and residential district, and after the venue became frequent host to major events such as the Grammys, its place in the city’s cultural landscape solidified.

Staples signed a deal in 2009 for naming rights in perpetuity — but AEG bought the naming rights back for an undisclosed sum in 2019. The pandemic put the search for a new name sponsor on hold, but the Crypto.com deal came together quickly after conversations began at the end of summer.

Staples’ fortunes have declined since the late ’90s, but the office supply company still has more than 1,000 stores across the country and has been on the Fortune 500 list for the last 21 years. Crypto.com is 5 years old, and its business relies on a form of money that has been officially banned in China — though the company says it complies with all relevant regulation in the countries where it does operate. Marszalek has never attended a game at Staples Center; the Christmas game will be his first visit.

But AEG’s Beckerman said he was impressed by the company’s commitment to the arena. “The long-term piece of this is actually most important to us, and they shared this vision,” Beckerman said. He described AEG as “bullish” on cryptocurrency more broadly.

With 10 million users and 3,000 employees, Crypto.com is a major player in the crypto world. Its core business is running an exchange that allows users to trade cryptocurrencies, store them in an online account and access them with a Visa rewards debit card, but it also has an NFT wing, cryptocurrency payment software, its own token and a number of others products in the works. Marszalek declined to share specific figures but said that the company reached profitability in early 2021 and has seen revenue grow 2000% in the last year.

Renaming Staples Center is the latest phase of a marketing blitz for the crypto company. A new ad unveiled by the company in October features Matt Damon intoning the “four simple words that have been whispered by the intrepid since the time of the Romans … fortune favors the brave.” In November, a handful of billboards with that motto went up in cities across the world, and the company took out a full-page ad in the Wall Street Journal featuring it.

The goal, Marszalek said, is not just to increase brand awareness and market share but to underscore the growing normalization of cryptocurrency in American society.

Marszalek said that Crypto.com has “an ambition of becoming a top-20 brand in the next 3 or 5 years, alongside names like Nike or Apple,” with popular sports serving as one gateway to mass adoption.

in a Morning Consult poll in September, people who self-identified as avid sports fans were nearly three times as likely to say they were familiar with cryptocurrencies as those with no interest in sports — 66% among avid fans versus 23% among non-fans — and some sports leagues have been dabbling in blockchain products in recent years.

In October 2020, the NBA partnered with a Canadian crypto firm, Dapper Labs, to create NBA Top Shot, a collection of NFTs that allowed fans and speculators to buy and sell crypto tokens linked to NBA highlight clips (think digital trading cards). By March, the Top Shot market had become one of the hottest corners of the NFT craze, racking up $230 million in sales — mostly on the secondary market.

The Top Shot market has cooled down since, even as the total NFT market has continued to balloon, but the total value of Top Shot NFTs still sits at an estimated $740 million.

LA’s isn’t the first NBA arena to get a crypto rebrand. In March, the cryptocurrency exchange FTX — a company run by the “richest man in crypto,” according to Forbesthat recently relocated its headquarters from Hong Kong to the Bahamas — signed a $135-million deal for the 19-year naming rights to the Miami Heat arena, formerly named after American Airlines.

Crypto.com paid more than five times as much for the rights to LA’s arena — but Marszalek isn’t worried that the investment might not pan out. “There’s not a shadow of doubt in my mind that it was worth it,” he said. “My level of conviction is 100%.”