‘We are killing people’: How technology has made your car ‘a candy store of distraction’ 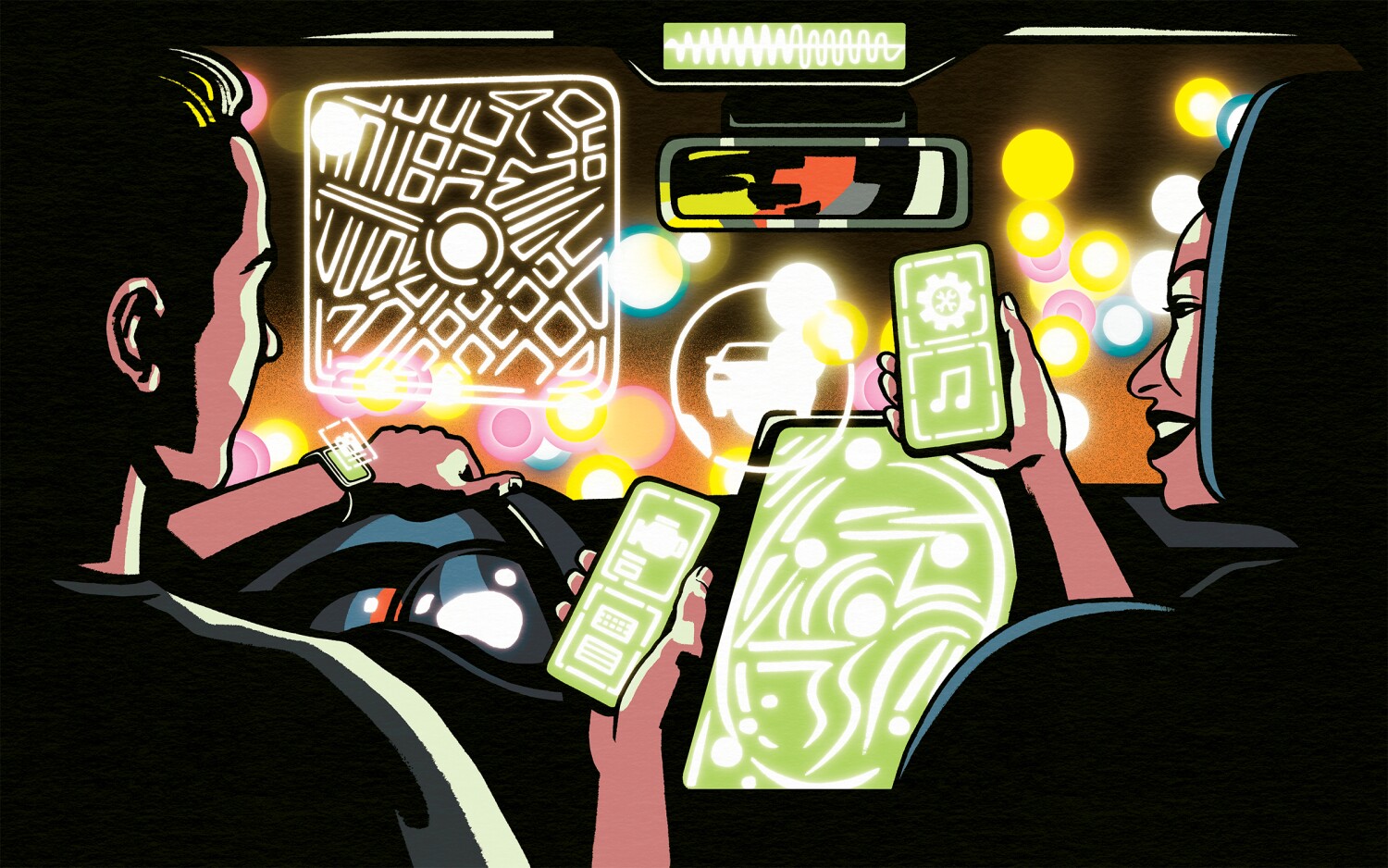 In the late 1980s, the US Army turned to outside experts to study how pilots of Apache attack helicopters were responding to the torrent of information streaming into the cockpit on digital screens and analog displays. The verdict: not well.

The cognitive overload caused by all that information was degrading performance and raising the risk of crashes, the researchers determined. Pilots were forced to do too many things at once, with too many bells and whistles demanding their attention. Over the next decade, the Army overhauled its Apache fleet, redesigned cockpits to help operators maintain focus.

Cognitive psychologist David Strayer was among those called in to help the Army with its Apache problem. Since then, he has watched as civilian cars and trucks have filled up to an even greater extent with the same sorts of digital interfaces that trained pilots with honed reflexes found so overwhelming — touch screens, interactive maps, nested menus, not to mention ubiquitous smartphones . In his lab at the University of Utah, he’s been documenting the deadly consequences.

“We are instrumenting the car in a way that is overloading the driver just like we were overloading the helicopter pilots,” said Strayer, director of the university’s Center for the Prevention of Distracted Driving.

“Everything we know from pilots being overloaded we can apply to motor vehicles,” Strayer said. But rather than apply it, makers of smartphones and automobiles have largely ignored the research, persistently adding popular but deadly diversions. “They’ve created a candy store of distraction. And we are killing people.”

To be sure, new automotive technology also includes innovative safety features such as lane-departure warning and blind spot detection. Yet, despite these and other crash-prevention systems, the highway death count continues to rise.

After decades of falling fatality rates, US roads have become markedly more dangerous in recent years. In 2021, motor vehicle crashes nearly 43,000 people killed. That’s up from about 33,000 in 2012, and a 16-year high.

Theories about why range from bigger vehicles — mammoth SUVs and pickup trucks on steroids — to aggression caused by COVID-era trauma. But no one in the safety field doubts that distracted driving is a main ingredient.

Reported fatalities due to distracted driving have remained flat for the last 10 years, 3,000 to 4,000 a year. But there is good reason to consider those figures a major undercount, as they rely on people admitting they were distracted, or a police officer or someone else witnessing a driver with phone in hand before a crash.

“It’s against people’s self-interest to say, ‘I was on the cellphone’ or ‘I was using the infotainment system'” after a crash, “because there can be serious consequences,” said Cathy Chase, who heads Advocates for Highway & Auto Safety.

“I don’t think we’re getting an accurate picture of what’s happening on the roads,” she said.

Other measures point to a much higher great. In early 2020, the National Safety Council said cellphones were involved in more than a quarter of crashes. A poll by Nationwide Insurance shows its agents believe 50% of all crashes involved distracted driving. And safety experts say the problem has only grown worse since the start of the pandemic.

Pretending that the toll is only a few thousand people a year makes it more difficult to change policies that could improve safety, Mark Rosekind said. He ran the National Highway Traffic Safety Administration during the Obama administration and is now chief safety innovation officer at driverless car company Zoox.

“People will use those low numbers as a way to minimize this, that it’s not a big problem,” he said.

Most people know distracted driving is bad — 98% of those polled told Advocates for Highway & Auto Safety they are extremely or very concerned about it as a safety issue. But most do it anyway. More than 63% of polled drivers said they use their cellphones while driving. That increased to 73% of people who use their cars for work.

Elene Bratton’s 5-year-old son jamie died in a car crash back in 2002 caused by a driver distracted while using a cellphone. She thought the mounting deaths would lead to serious action by lawmakers and safety regulators but instead has watched the problem grow much worse. “We act like there’s nothing to be done with car crashes like this, like we all have to deal with it,” said Bratton, who runs a website, jamiesjoy.orgin part to raise money to help push policy changes.

How do the companies behind all those distracting screens and apps — the automakers and smartphone manufacturers — view their responsibility for the problem and their role in solving it?

It’s hard to say. The Times asked the five top-selling carmakers in the US — General Motors, Ford, Toyota, Stellantis and Honda — to provide an executive to speak about what they’re doing to help prevent distracted driving. All declined, offering instead to make written public relations material available. Apple and Samsung, the two leading smartphone makers, also declined interview requests.

When companies do talk about distracted driving, they tend to frame it as a problem with cellphones. Their solution: Integrate the same functionality and more into dashboard interfaces and voice-recognition systems.

Apple executive Emily Schubert, in a flashy video Internet presentation in June, announced major new features for the company’s CarPlay infotainment system. Apple declined to make Schubert or any other executive available for an interview, but in an email a spokesperson called CarPlay “the smarter, safer way to use iPhone in the car .” What makes it safer, and to what degree? No details were provided.

The company did note it provides Driving Focus mode on its phones, which, if engaged by the customer, keeps the phone silent and doesn’t allow notifications to come through. An Advocates for Highway & Auto Safety poll showed 70% of respondents had never used such a feature.

A Honda spokesperson said by email that “the biggest thing we can do to reduce distraction is to reduce the likelihood of a driver looking at their mobile phone while driving” by putting more focus on infotainment systems, through which the company is making “an attempt to minimize distraction while satisfying the driver’s ease of use and access to desired information.”

Honda offered few details and declined an interview about the subject. The company did say it’s working with researchers at Ohio State University on the infotainment interface. The professors involved declined to offer details as well, saying their work for Honda is proprietary.

The ability to control features such as air conditioning and music playlists via voice commands theoretically improves safety by letting drivers keep their eyes on the road. But with the technology still a work in progress, scientists are learning it can be just as dangerous as fiddling with a smartphone.

in a 2019 paper, Strayer’s team reported that completing tasks using voice commands took much longer than other kinds of interaction with smartphones and infotainment systems. The extra time significantly increased the driver’s cognitive load. Believing that verbal communication doesn’t interfere with driving shows a “naive understanding of how language works,” Strayer said. Brain scans show that “language uses a lot more of the parts of the brain than driving does.”

State laws that ban holding a cellphone or texting while driving give the impression that the danger stops there. But what the Apache research showed, and decades of subsequent research on automobile distraction has confirmed, is that the distracted driving problem is more than mere distraction. The problem is asking the brain to do too many things at once. The technical term is cognitive overload, which includes distraction and multitasking and sensory input from a variety of sources.

As part of its 2019 study, Strayer’s team assembled data on driver use of infotainment systems in more than two dozen cars. Drivers were fitted with sensors attached to the head and chest, and data on driver heart and brain activity were collected to assess distraction and cognitive load.

Although some systems were more distracting than others, all hampered the driver’s ability to safely pay attention to the task of maneuvering a two-ton vehicle on public roads, the study found.

Meanwhile, building the distractions into the car has the effect of sanctioning its use in the eyes of drivers. Thomas Goeltz, a Minnesota man whose 22-year-old pregnant daughter, Megan, was killed by a distracted driver in 2016, said that although people know talking or texting on the phone while driving is dangerous, the options offered on a car’s dashboard offer a false basis for complacency. “People think it came with the car, it must be safe,” he said.

In a glancing acknowledgment of their shortcomings, NHTSA in 2015 issued guidelines on infotainment systems that recommend they be designed so a driver’s attention is not distracted for more than two seconds out of six.

The guidelines are voluntary, however. Strayer said that many of the actions tested in his research require drivers to take their eyes off the road for 12 seconds or more.

Any company hoping to do something about driver distraction must grapple with the majority of US drivers who refuse to stop scrolling and swiping behind the wheel. For now, smartphone companies, auto companies, app makers, advertisers, retailers — just about the whole consumer information ecosystem — are happy to fill the demand. Consulting firm McKinsey projects in-car advertising, entertainment and consumer data sales will generate $11 billion in annual revenue by 2030.

By then, it’s conceivable consumer cars will be equipped with a version of the autonomous driving technology that’s beginning to be deployed in robotaxis and delivery vehicles in limited areas. At that point, turning the interior of a car into an immersive infotainment bubble makes perfect sense.

What can be done in the meantime? The National Transportation Safety Board has called for a total ban on in-car device use — excluding built-in infotainment systems — while driving, except in emergencies. At least, the NTSB says, companies should restrict device use by employees.

In Europe, automakers will soon be required to install monitors to detect driver distraction in order to receive top safety scores. No such move is being publicly contemplated in the US

Safety advocates say education campaigns aren’t nearly enough to deal with the enormousity of the problem but are one necessary component. They also call for stricter enforcement by police. Above all, they say, drivers need to be more responsible for their own safety and to keep from harming others.

Without major changes in driver behavior and public policy, uncounted tens of thousands of people will die each year, with devastating results on their families and their friends. That’s part of the cost of the infotainment culture — which, thus far, Americans have been willing to accept.