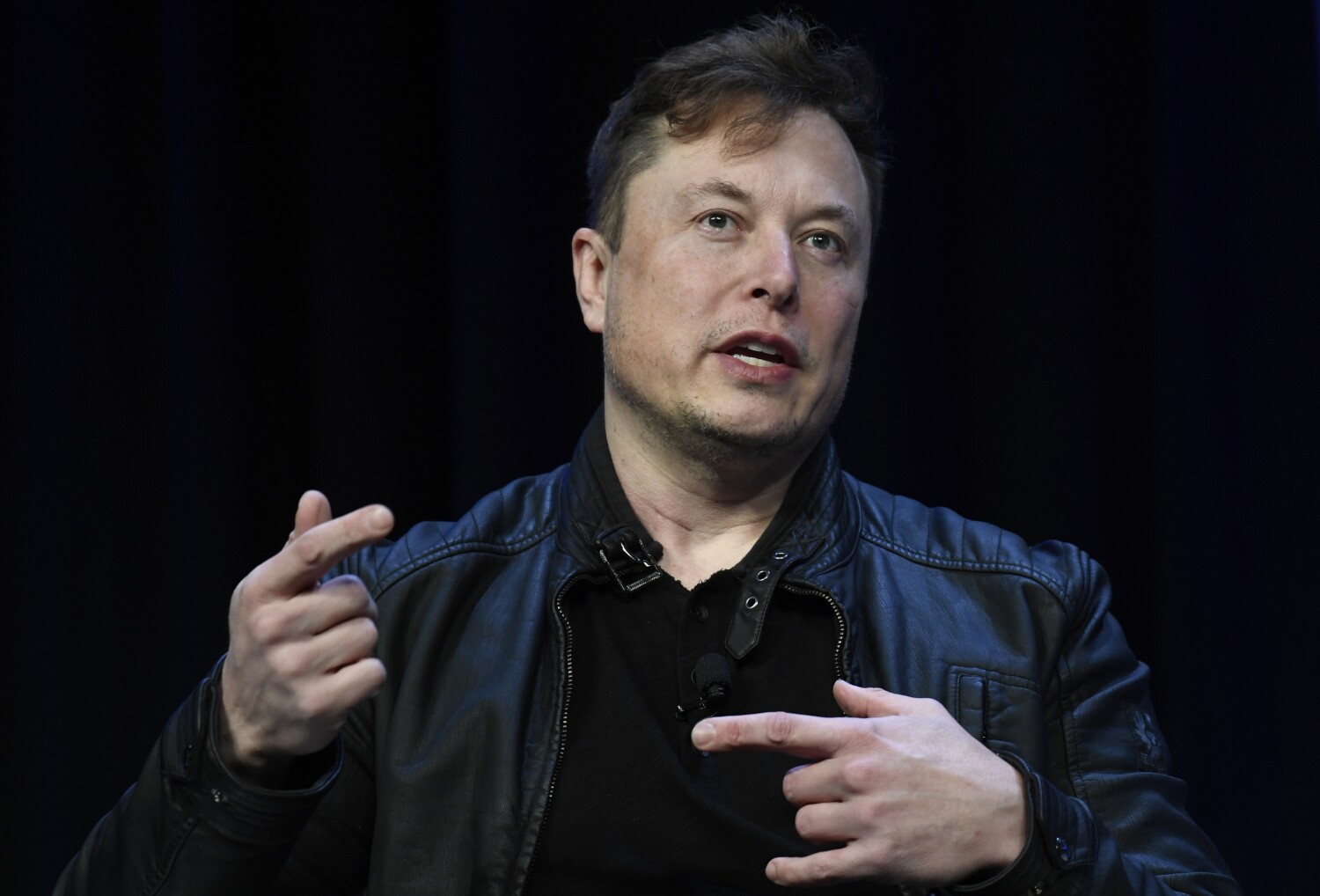 With his new purchase of a 9% stake in Twitter, Elon Musk isn’t just diversifying his investment portfolio. The Tesla chief executive is also deepening his entanglement with one of America’s foremost venues for public discourse — potentially hinting at future ambitions to influence the platform’s handling of free speech, content moderation and digital censorship.

The ultimate aim of Musk’s 73.5-million-share purchase, worth $3 billion based on the closing price Friday, remains unclear. But tweets that he posted just days after buying the stake indicate that Twitter’s status as an arena for debate may have weighed heavily on his decision to buy in.

“Given that Twitter serves as the de facto public town square, failing to adhere to free-speech principles fundamentally undermines democracy,” Musk, the you rich in the world and an active Twitter user with 80 million followers, posted March 26. Regulatory filings indicate that Musk bought his shares March 14.

“What should be done?” he added, before continuing in a follow-up tweet: “Is a new platform needed?”

The latter question is one that has cropped up over and over again in the last few years as social media have taken on an ever-larger role in America’s public discourse and, accordingly, prompted debate as to if and when platforms should delete, hide or fact-check users’ posts.

Such arguments have plagued the internet for decades, but rose to national prominence in 2016 and 2020 amid concerns about electoral misinformation; during the COVID-19 pandemic as medical misinformation went viral; and in the wake of the Jan. 6 insurrection at the US Capitol as people debated what risk social media pose to public safety.

Indeed, it was in the aftermath of the insurrection that Twitter, Facebook and other platforms took unprecedented steps in moving to ban former President Trump from their sites for his role in the day’s events. With the notoriously social media-savvy “tweeter-in-chief” cut off from his favorite soapboxes, a host of fledgling social networks saw a chance to scoop up one of the biggest posters on the planet — or at least get some of his followers to join.

Those ambitions largely failed to materialize, however. Instead of joining a preexisting app such as Parler or Gab, both of which have sought to build a brand around free-speech absolutism, Trump hinted that he might make his own platform from scratch.

Yet those efforts, too, largely failed to catch on. Trump’s homegrown app Truth Social was waylaid from the start by technical complications and has since seen its user base stagnant; Trump posted on the platform only once. A personal blog Trump launched similarly failed to recapture the dynamism of his Twitter brand.

Gettr, another free-speech-focused app launched by former Trump advisor Jason Miller, can’t even get Trump himself to join.

If Musk’s recent tweets are any indication, the billionaire tech magnate is pursuing a similar goal but from the opposite direction. Rather than trying to port his brand onto a more niche platform or build his own, largely unmoderated site from scratch, Musk’s 9% stake in Twitter suggests he may instead try to change Twitter from within.

Although Musk is now Twitter’s largest shareholder, his stake is a “passive investment,” meaning under US securities laws he is barred from seeking control of the company — but that doesn’t preclude him from doing so in the future, through active investments.

It also doesn’t mean Musk must remain passive in communicating his thoughts about Twitter, in public or within the company, said Charles Elson, founding director of the Weinberg Center for Corporate Governance.

“He can always express his opinion,” Elson said — something Musk is not shy about. “Buckle your seat belts.”

An ideological stance on America’s content moderation debates isn’t the only explanation for Musk’s move. Twitter also plays a practical role in his business empire, especially as a PR tool.

“No one has benefited more from the existence of Twitter than Elon Musk,” said David Kirsch, a professor at the University of Maryland’s Robert H. Smith School of Business and coauthor of the recent book “Bubbles and Crashes.” “Donald Trump used Twitter to win the presidency, but Elon Musk used it to sustain the Tesla narrative and support the stock when the company was in danger of collapse.”

Musk’s is one of Twitter’s most followed accounts. He tweets often to promote Tesla technology and SpaceX launches but also often creates controversy. Perhaps the most infamous was a Musk tweet that implied a rescue diver was a pedophile after the man belittled Musk’s plan to rescue children stuck in a cave in Thailand with a miniature submarine. Musk is also currently involved in a legal dispute with the US Securities and Exchange Commission related to a tweet in which he claimed he could take Tesla private at $420 per share.

“No one has been more adept at using Twitter to control public narrative” than Musk, said Kirsch, who’s currently researching the effect of Twitter bots on Tesla’s stock price and reputation. (Bots are automated Twitter accounts created to resemble real people and are often used to flood the app with programmed messages.)

Musk may be investing “if he believes that Twitter is adopting policies that limit his ability to use the platform,” Kirsch added.

Musk’s exact intentions, however, are hard to discern. His only tweet since news of the purchase went public has been a cheeky “Oh hi lol.”

Were Twitter to pivot to a more absolutist free-speech policy, it probably would constrain the market available to those smaller platforms that have been pursuing that strategy for years.

Yet in statements to The Times, some such firms maintained that an ideological win is still a win.

“We appreciate Elon Musk validating our thesis and exploding interest in a market that Gab has pioneered for nearly six years now,” said Andrew Torba, founder of the far right-friendly platform Gab, via email. “Anything that promotes more speech and not less is a good thing in our book.”

“I am heartened that he will help return Twitter to its roots in embracing free speech principles,” Weinstein said in an email. “Musk’s investment will likely have a negative impact on newer Twitter alternatives such as Gettr and Truth Social. Social media is one of the most challenging industries to compete in.”

Parler CEO George Farmer wrote that he is encouraged by Musk’s “shared passion around the fundamental importance of free speech.”

Twitter did not respond to a request for comment as to whether the company anticipates any site policies changing as a result of Musk’s investment, nor did it clarify how it will moderate Musk’s personal account now that he’s also a major stakeholder.

Regulatory filings describe Musk as a long-term investor looking to minimize his buying and selling of the shares. Industry analysts are skeptical about whether the mercurial CEO will remain on the sidelines.

“We would expect this passive stake as just the start of broader conversations with the Twitter board/management that could ultimately lead to an active stake and a potential more aggressive ownership role of Twitter,” Dan Ives of Wedbush Securities said in a client note early Monday.

Twitter’s stock surged more than 22% at the opening bell Monday.

SEC rules require that buyers of significant stakes in companies report their purchases to the agency within 10 days. On March 14, Musk bought the stake, according to his filing. He had filed nothing by March 25, when he posted a Twitter poll asking whether the platform adheres to the principles of free speech. He submitted his filing on April 4, 11 days late.

That could cause further problems for Musk. “A deadline is a deadline, and the SEC can impose penalties,” said Elson, the Weinberg Center director — although, he added, Musk has shown that’s something he’s willing to tolerate.

In October 2018, Musk and Tesla agreed to pay $40 million in civil fines and for Musk to have his tweets approved by a corporate lawyer after he tweeted about having the money to take Tesla private at $420 per share.

The funding was far from secured and the electric vehicle company remains public, but Tesla’s stock price jumped. The settlement specified governance changes, including Musk’s ouster as board chairman, as well as preapproval of his tweets. The SEC brought a securities fraud charge, alleging that Musk was manipulating the stock price with his posts.

Musk’s lawyer is now asking a US District Court judge in Manhattan to throw out the settlement, contending that the SEC is harassing him and infringing on his 1st Amendment rights.

Musk’s revelation about his stake in Twitter shares comes two days after Tesla posted first-quarter delivery numbers. Although the company delivered 310,000 vehicles in the period, the figure was slightly below expectations.

Shortly after tweeting in November about selling off some of his Tesla shares, Musk proceeded to do so, and he wrote on Twitter that the sale proceeds would be used to pay tax obligations on stock options. Analysts estimate his tax obligation at $10 billion to $15 billion. But some of the money could have been used to buy the Twitter stake.

So far, he has sold more than 15 million shares worth roughly $16.4 billion. With some sales in late December, Musk is close to selling 10%.

The Associated Press contributed to this report.